As I child, I believed in true love and fairytales. I convinced myself that there was one special man out there, made just for me. All I had to do was wait, and one day he would appear. Then I grew up and discovered the ugly truth.

Disney movies were full of crap.

Relationships took work. People made mistakes. And sometimes, you didn’t see what was standing right in front of you until it was too late.

Deacon Lockhart was my best friend. And then I lost him. But now I finally have a chance to make things right, and this time I refuse to screw it up. With every smoldering look and wicked word, he charms the hell out of me… and I’m pretty sure I’ll never get enough.

Read for FREE on Kindle Unlimited 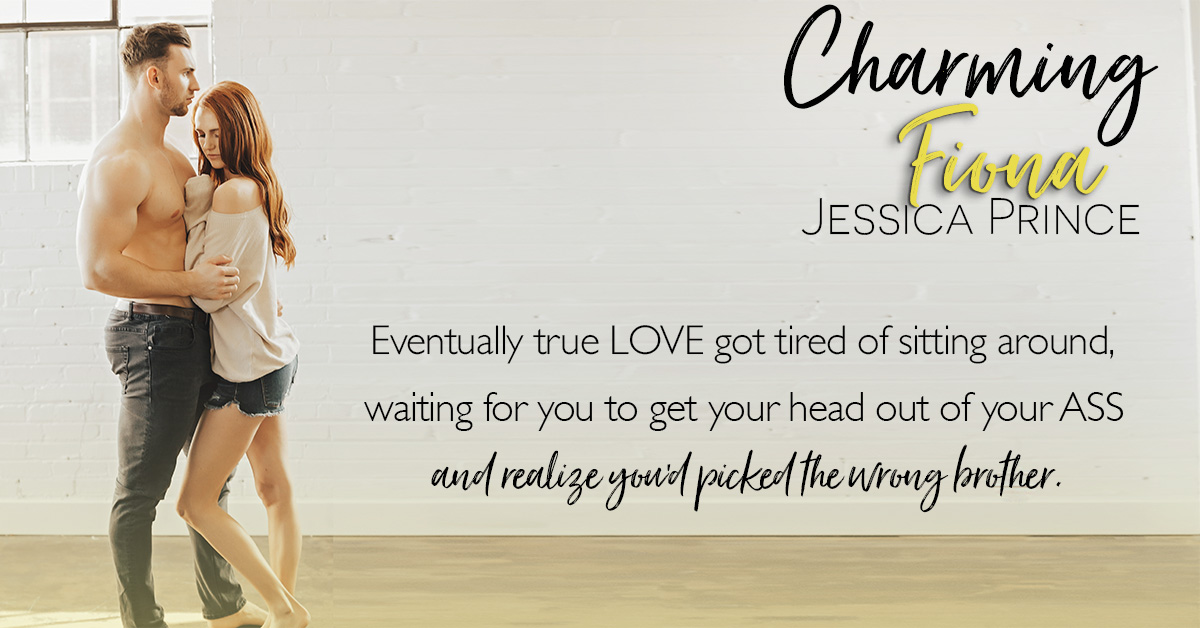 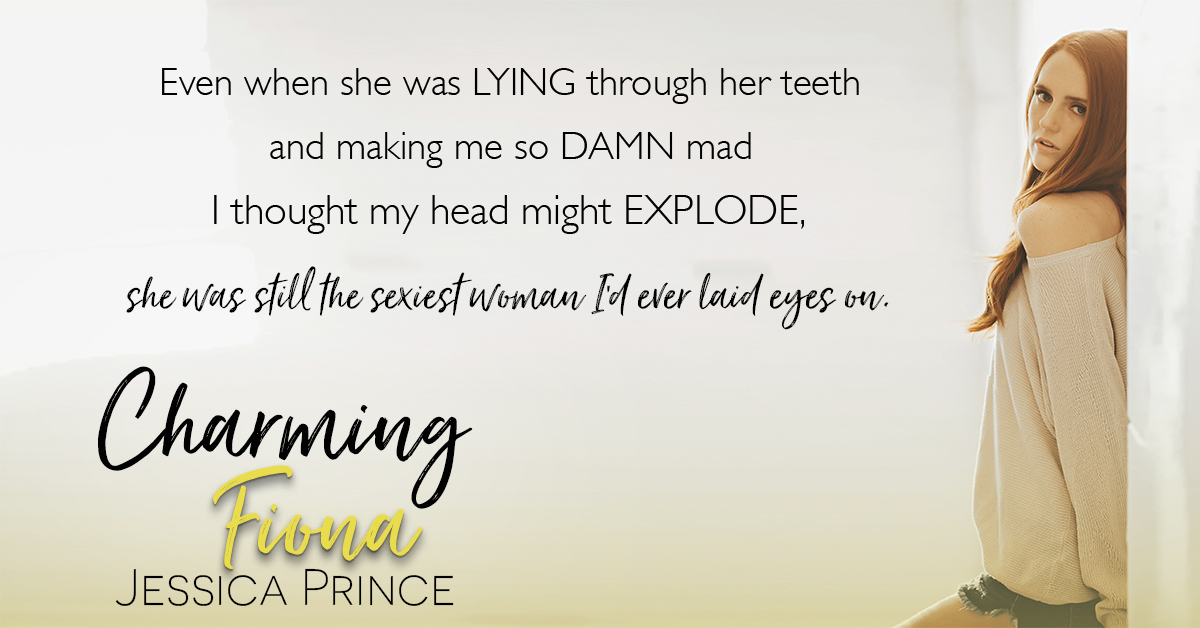 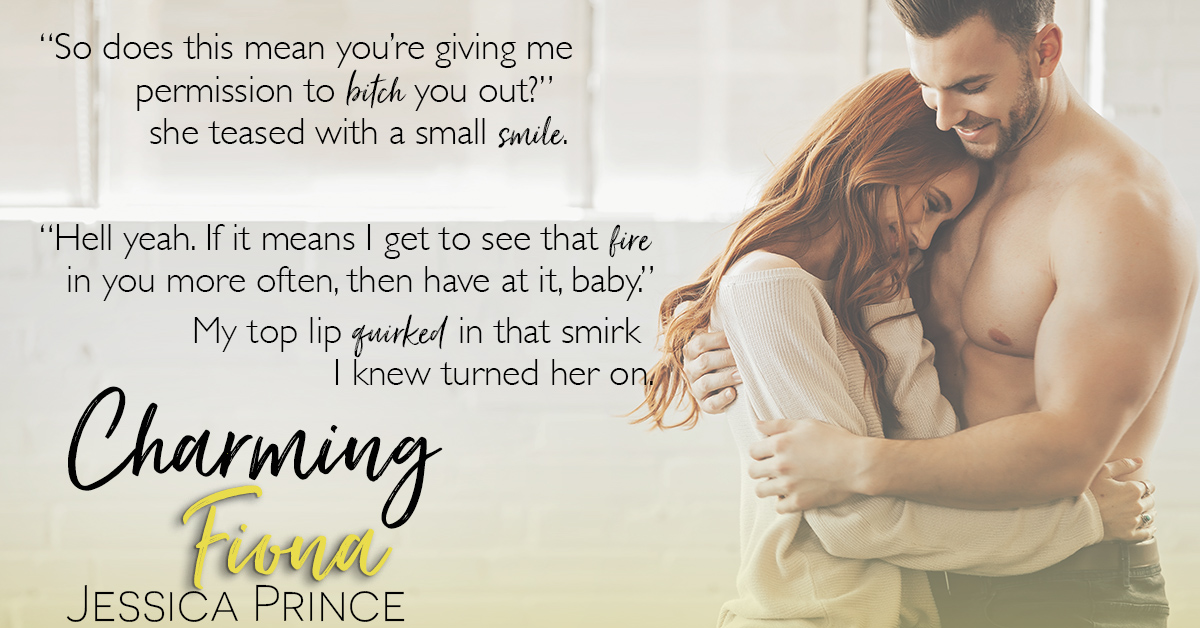 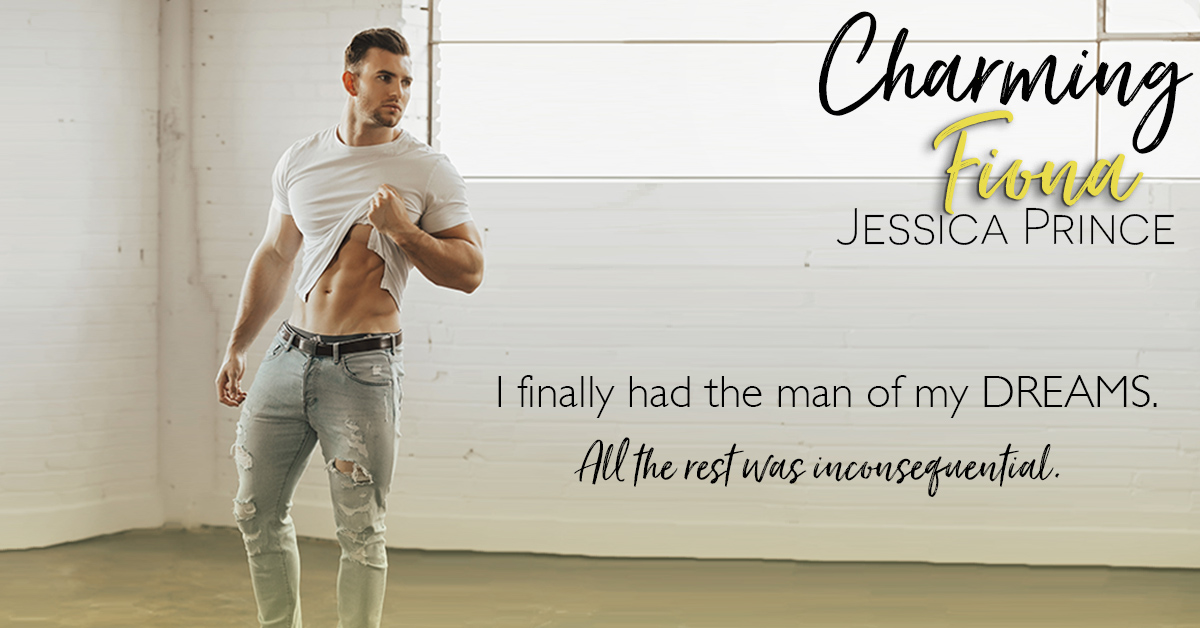 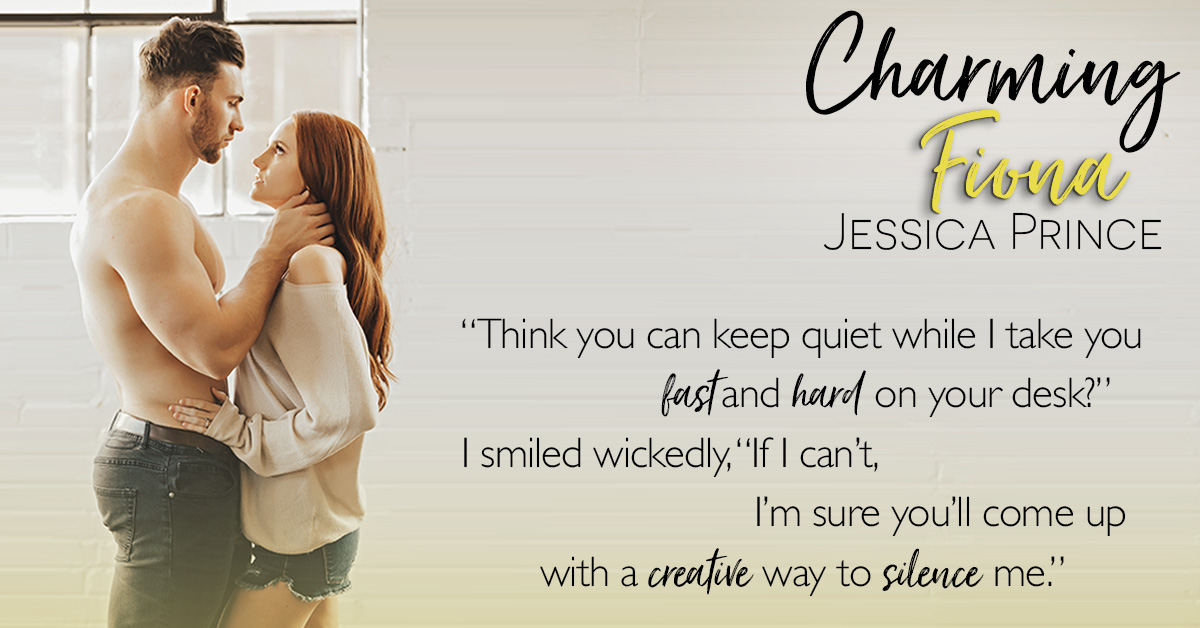 Charming Fiona was exactly the book I wanted it be. Sweet, funny, sassy, angsty all rolled into one, Jessica Prince once again makes me fall in love with her characters. You could really fit this book into a number of different tropes. Friends to lovers, Second Chance, Unrequited Love just to mention a few. Fiona and Deacon, I loved that they were best friends and grew up together. This book does take us into the past at times and just being able to go through their history made my heart squeal and affirm my belief that these two really do belong together. Their road though isn't easy and it's paved with a whole lot of missteps and misunderstandings. Ones that made my heart feel like it was going to die while at the same time had me wanting to scream OH MY GOD, Figure it out before I have a heart attack. Deacon oh Deacon, Deacon, Deacon...... When he turns on the Alpha in this book. Well dayummmm I loved it. His persistence with Fiona was HOT !!!!! I'm talking call the fire department hot. Their chemistry and the sex in this is all sort of steamy goodness. Just picture some of your "office" and "pool" table fantasies that we all you have come true. But what I really loved about this book was their connection. They knew each other inside out. They pushed when they knew they needed to push and they were each other's support even when they weren't speaking to one another and that is what a good romance and love story is made of. Made my heart feel lightheaded and happy. Of course one of the things I absolutely love about Jessica's writing is how she manages to seriously write a whole slew of characters that I love. Every single one of them and of course we get the gang in this one in full force. From the maniac muskateers to the Nana Lockhart herself saying the most inappropriate thing at funnily enough what I think are the most appropriate times. Another fantastic read !!

I hated grocery stores. Like seriously hated them to the point that all that was in my fridge was a box of baking soda, half a case of soda, and something that might have been cheese at one time, but I wasn’t a hundred percent certain on that.

Funny thing was, I used to love cooking, and I was damn good at it. But there was nothing enjoyable about cooking for one. I always ended up with leftovers that sat in my fridge until they inevitably spoiled. So I eventually moved to takeout or those sad meals for one you found in the freezer section.

Thus began my disdain for the grocery store.

However, in my infinite wisdom, I’d decided that, since I was about to step back into the dating world, maybe it was time to implement changes in every aspect of my life. If I was going to get back on the horse again, so to speak, and start dating, then I figured why not just revamp everything?

I was going to be a whole new Fiona, one who stopped stress-eating snack cakes to fill the hole of loneliness inside of me. I was also going to implement a healthier diet and start working out.

It all sounded good, in hindsight. Then I signed up for one of those early-morning boot camps. I didn’t even last half a session. I kind of lost my shit when the instructor yelled “give me five more!” while we were doing these god-awful things called burpees—an invention of the Devil, right along with bras and pantyhose. I’d done three and was already dying, so I told him to take his five more and shove them right up his clenched ass.

I got kicked out.

Then I tried Pilates and woke up the next day feeling like I’d pulled every muscle in my body. My third attempt at exercise was yoga. Thankfully that hadn’t been so bad. I’d already gone three times and was actually starting to feel a little more zen. Sure, it probably wouldn’t help with the little food baby I’d developed since Deacon started dating Leah and I’d decided to eat my feelings, but it kept me off the couch and away from the brain-rotting reality TV I’d started to become obsessed with.

And bonus: the instructor was hot. Granted, he was a vegan hippy who wore Birkenstocks and reeked like patchouli, so not my type at all, but the smell wasn’t too over powering if I sat in the second row, and it provided me with nice weekly eye candy.

With dating on my horizon and fitness checked off my list, it was time to start the clean-eating portion of my New Fiona plan. Hence the trip to the supermarket after yoga.

I stood in the health food aisle, glaring down at the bag of kale chips in my hand like it had just insulted my mother. Little Debbie had just come out with their holiday cakes in the shape of Christmas trees, and they tasted a million times better than stupid kale chips.

My lip curled in disgust as I tossed the bag back onto the shelf. Maybe it would be best for me to start out slow, like a salad for one meal a day for a few months before expanding on that. I turned and started pushing my cart out of the aisle of tasteless, flavorless cardboard snacks only to come to a screeching halt at the sight of Deacon standing a few feet away.

“H-hi,” I stuttered. Seeing him made my belly erupt with a million butterflies.

“Christ,” he grunted in a deeply masculine, gravelly voice. “What the hell are you wearing?”

I looked down at my attire. Black yoga pants that hugged every inch they covered and a dark orange cami. I had a pale yellow jacket over my top, but it still clung to me from chest to waist, not that there was much to cling to. I was tall and thin, and while I had curves, they were nothing on par with Lola or my other friends. I had a happy handful of boobs and ass, but only just a handful.

I was covered from my neck all the way down to my feet, but the way Deacon was staring at me made me feel like I was standing in the center of the supermarket totally naked.

His eyes left a burning trail up my body before meeting my own. I barely caught the heat in his gaze before it was snuffed out by curiosity and a bit of bewilderment. “You do yoga?”

I wanted to be offended that he’d be so surprised by my doing anything even remotely active, but he’d known me all my life.

“It’s a new thing,” I said with a small shrug. “I decided I wanted to try and be healthier.”

His lips quirked up in a smirk as he scanned the items in my cart. “Really? And mini donuts and Fruity Pebbles are part of your diet plan?”

I glared defensively, cocking my hip and crossing my arms over my chest. “I also got whole grain bread and baby spinach.”

His smirk turned into a grin. “Oh, you’re right, sorry. Those totally cancel out the breakfast cereal that’s basically nothing but sugar.”

“I’ll have you know that cereal is perfectly healthy. It contains most of the basic food groups, and it’s not like I’ll eat the whole box in one sitting. And I’ll have a salad for dinner to balance it.”

He held up his hands in surrender and moved to the end of my cart, directly opposite me. “I’m sorry. I didn’t mean any offense. I was just teasing.”

His big hands wrapped around the thin metal prongs, and I couldn’t help but notice how long and thick his fingers were. It made me think of something else of his that could possible be long and thick, and how badly I wanted to find out for myself.

I smiled shyly. “It’s cool. I know you were. I think… well, I think we’re just finding our footing with each other again.”

We’ll get there. At just those three simple words, the reality of just how badly I’d screwed up with Deacon hit me like a ton of bricks.

“Yeah,” I whispered, my heart lodged in my throat. “We will.”

We had to, because I’d been living a life without him in it for way too long.

After saying our goodbyes, I was left with a feeling of longing as I watched him walk away. Needless to say, I bought the damn Christmas tree snack cakes.

Two boxes of them.

The Girl Talk series is complete!

For those of you who love your romance with a little humor and a whole lot of steam, this series has everything you’re looking for.

Each story is an interconnected standalone, but you don’t need to read together to enjoy them all!

Read for FREE on Kindle Unlimited

Born and raised around Houston, Jessica is a self-proclaimed caffeine addict, connoisseur of inexpensive wine, and the worst driver in the state of Texas. In addition to being all of these things, she’s first and foremost a wife and mom.

Growing up, she shared her mom and grandmother’s love of reading. But where they leaned toward murder mysteries, Jessica was obsessed with all things romance. When

When she’s not nose deep in her next manuscript, or binging on sit-coms, you can usually find her with her kindle in hand.

Hosted by Love Affair With Fiction